This sound and mastering technician has been part of other companies in the past and his more than 30 years of experience have led him to play his exclusive music for the best clubs in the country during the 90s and onwards and also acting abroad in places like Brussels, Oslo, Berlin, Stockholm, Vilnius, Toulouse, London or Zagreb among others. He is one of the few that has accomplished to have his own and particular sound, forged by hard work and a lot of effort at the studio, knowing what he wants and showing that at each one of his sets and tracks. Full of charism, passion, and quality, he is able to surprise the most demanding ears of the actual musical scene.

If there are any pioneers in Toledo, K-Effect is, without any doubt, one of them. Working in developing  new wave and slow sounds with lot of energy, fresh and cool sounds which has led them since they began as K-Effect, four year ago, to publish, remixing and mastering on labels such as Nein Records, Roam Recordings, Espacio CIELO, CSK Beat, Dlimited, Logical Records, Tom Tom Disco, Emerald & Doreen, Regith Rec, ESTHETIQUE or Beat is Murder, shared EP with artists like Freudenthal/Pardon Moi, Long Champs, Demon Jee/Nozz, Zombies in Miami, Parissior, Machinegewehr, Motel77, Volta Cab, Ujin Ray, Los Fugazzi, Moo Moonster, Olsvangér, Leonor, Cabizbajo among other artists consolidated in the current scene electronics… 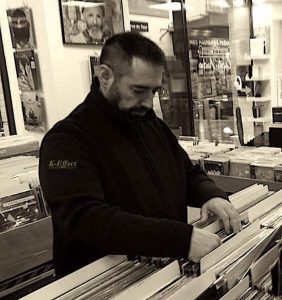 Currently, he is quite focused on underground sounds between 100 and 120 BPM.